It’s long been known that South African motorists have been fleeced when it comes to road construction costs, but by how much has always been a matter of speculation.

Now we have a better idea. The Gauteng Freeway Improvement Project (GFIP) to upgrade the highways between Joburg and Pretoria, originally costed at R4,6bn in the mid-2000s for a 340km upgrade, ended up costing just shy of R18bn for 193kms. After a year-long study involving whistleblowers, road engineers and quantity surveyors, Organisation Undoing Tax Abuse (Outa) concluded that the 193km freeway improvement project should have cost no more than R8bn, even allowing for cost escalations and other contingencies. That’s a R10bn overcharge, enough to build 40 Nkandlas (the name of President Jacob Zuma’s taxpayer-funded private residence in Kwazulu-Natal).

The client in this case was none other than SA National Roads Agency (Sanral), which paid an average of R86.6m per kilometre, between two and three times what comparable roads in Africa (and SA) would cost.

If the R10bn cost overrun is correct – and several industry insiders claim it is – how did the construction companies pull it off? And why are no construction executives in jail for this swindle?

In 2006 there was a secretive road contractors meeting attended by Basil Read, Concor (part of Murray & Roberts), Haw & Inglis, Grinaker LTA and Raubex where the colluders agreed to allocate tenders for the construction of roads. At this meeting it was also agreed that those firms not interested in winning tenders would nevertheless submit “cover bids”, which are sham bids intended to lose while lending legitimacy to the tender process. The losers would receive compensation, or “loser’s fees”, from the winners.

When it came to the Gauteng freeway project, the Competition Commission found that Concor, in joint venture with Stefanutti, agreed with WBHO in 2006 to carve out the various construction projects among themselves. The project was divided into “packages” ranging in size from four to 23 kilometres, including bridges and other structural work. “They further agreed to exchange cover prices to give effect to the allocation arrangements,” says the Competition Commission in a 2013 investigation.

The tender for Package A was awarded to Group Five, Package B was awarded to a consortium led by Wilson Bayly Homes Ovcon (WBHO), and Package E was awarded to a consortium headed by Group Five. The projects for Package A, B and E were completed in 2010. Package A was an 18km stretch of highway on the N1 from the Golden Highway to 14th Avenue in Roodepoort, and from the Uncle Charles intersection near Soweto to Diepkloof. Package B was a 21km project extending from 14th Avenue to Buccleuch in Johannesburg north. Package E was further sub-divided into three sections totaling 28kms, forming a ring road to the south of Johannesburg.

Work package I, involving a 10km stretch of highway on the R21 from Gillooly’s to Rietfontein, came in at a cost of R95m/km, nearly three times the R32,5m Outa estimated it should have cost. This tender was awarded to CMC G4 Joint Venture, led by the Italian CMC group, which is also part of the CMC Impregilo Mavundla joint venture involved in building Eskom’s Ingula pumped storage electricity project in the Little Drakensberg, a project that nearly trebled in cost to R26bn over the course of construction. (Philani Mavundla, part of the CMC consortium, offered to raise funds to pay for President Zuma’s Nkandla residence).

Less well known in all this is the role of the the South African Forum of Civil Engineering Contractors (SAFCEC), an employer’s body that speaks for the industry and sets standards of professionalism and ethics for members. When the Gauteng freeway tenders were first issued, members reportedly leaned on SAFCEC to strong-arm Sanral to change some of the tender specifications to better suit their interests and their pockets.

Then there is the Construction Industry Development Board (CIDB), a statutory board set up in 2000 to promote “efficient and effective infrastructure delivery” and develop the emerging sector, among other things.

One wonders where these bodies were when the construction companies were looting the country.

Following the Competition Commission’s findings that the price of the GFIP was inflated through collusive practices, SA National Roads Agency (Sanral) did its own inquiry and last year concluded that construction companies had overcharged them by R750m. though not all of this was GFIP-related.

Hogwash, cried Dave Zeitsman, a road engineer with 47 years’ experience working on road projects in SA and elsewhere in Africa. He got hold of the bill of quantities published by SA National Roads Agency (Sanral) for the Gauteng freeway projects and did his own calculations. He concluded that the resurfacing of the existing roads should have cost no more than R325 a square metre, even allowing for road strengthening, cost overruns and contingencies. Since 62% of the project was merely resurfacing existing roads, he says this portion of the project should have cost no more than R1bn.

What about the 38% of the project involving construction of new roads? Zeitsman says this should have cost no more than R1,666/m2 or R2,3bn in total. Add another R1,6bn for the 47 new bridges built, and the 134 existing bridges widened. Then throw in R1bn more for lighting and median barriers, and the total construction cost should have been R5,9bn. Outa fattened this even further and came to a plausible construction cost of R8bn – nowhere near the R18bn Sanral paid.

In a recent Carte Blanche programme on M-Net, the colluders denied wrong-doing. Sanral, too, says the Outa study is a rehash of an old study done a year ago, and makes incorrect comparisons while falling into the trap of generalising complex engineering projects.

Zeitsman was ready for this, and pulled out an international comparison. One of the projects he worked on was the 85km Addis Ababa-Adama six-lane freeway in Ethiopia. Completed in 2014, it cost R1,541 per square metre. Compare this with the average R2,486/m2 paid for the Gauteng freeways. That means we paid an average of R86.6m a kilometre, when comparable roads elsewhere are costing R30m to R40m. 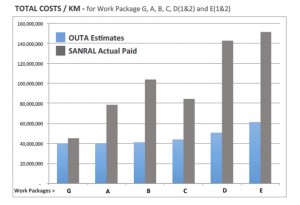 Closer to home, the 32km Tonota-Francistown road in Botswana, which involved substantial earth and structural works, came in at a cost of around R30m/km. The contractor was China Railway Seventh Group. Even the Americans build cheaper highways. The 22-lane Katy freeway in Texas – which involved the relocation of railway lines – came in at nearly half the cost per square metre of the Gauteng freeways. China recently completed the 2,787km International Transit Corridor between China and Russia’s border with Europe at 40% of the cost of the Gauteng freeways.

“Once you have competitive bidding in a construction project where the big South African companies cannot rig the game, you will find that the bidding is competitive,” says Zeitsman. “This is why they want to keep the Chinese construction companies out. They would be too disruptive to the club.”

Slap on the wrist

The 2013 Competition Commission investigation into collusion in the construction industry focused on just 300 or so projects, which included the Gauteng freeways. The investigation did not cover the 10,000-odd projects that defined South Africa’s infrastructure boom between 2002 and 2010. Due to the sheer workload in wading through so many projects, the Commission opted for a “fast-track” settlement process which allowed guilty firms to come clean of their own accord in return for leniency. Three firms opted not to accept the Commission’s fast-track settlement offer. They were Group Five, Construction ID and Power Construction. The Commission said it would investigate and prosecute these firms based on evidence gathered during its investigation. Group Five’s role is noteworthy because though it sat in on bid-rigging meetings, it decided not to go along with the plans being hatched with its competitors. It then turned snitch and handed over evidence of bid-rigging to the Commission, though it had foreknowledge of the bidders’ cover prices and managed to snag some of the juiciest bits of the Gauteng freeway project.

Based on the sample of 300 projects investigated by the Commission, penalties totalling R1,46bn were levied against 15 firms for collusive behaviour. Four of these firms agreed to penalties exceeding R300m each: Wilson Bayly Homes Ovcon (WBHO), Murray & Roberts, Stafanutti Stocks and Aveng. The colluders agreed to pay a further R1.5bn commitment to social development over 12 years, and to accelerate transformation of the sector. Only a portion of these penalties relate to GFIP.

This collective fine of about R3bn – of which half is payable by seven firms over 12 years – amounts to a slap on the wrist when compared to the billions that have been siphoned off of the Gauteng freeway project, says Outa chairman, Wayne Duvenage. Discount that over 12 years at a 6% discount rate, and the present value of this penalty comes in at around R750m – curiously, exactly what Sanral claimed it had been overcharged by construction companies.

“I bet these firms will receive black empowerment points for this spend, and will still be eligible to tender for future public sector projects,” he says. “Where are the jail terms for the participating executives, such as has happened in Brazil over the Petrobas scandal?

“The point that is being missed about the massively inflated costs of the Gauteng Freeway project is that we are now saddled with an e-tolls system that is completely broken, with compliance levels of about 20%. E-tolls are dead. Sanral collects around R70m a month from the 20% that are paying their tolls, virtually all of which goes to Austrian-owned company ETC, which administers the system. Had we built these freeways at a more reasonable price, we would opted for a different revenue model which would have been reasonable and practical.”

We now know bid rigging was going on as early as 2006, and probably much earlier. The colluders have issued their mea culpas, changed a few personnel, and moved on. This raises the question: what was the cost to the economy of bid-rigging in the construction and engineering sector? Certainly more than the R3bn penalty imposed on the guilty companies.

Sanral has had a rough run of things in recent times. Last year the City of Cape Town challenged its attempts to introduce tolling on the Cape N2 Winelands route, arguing that Sanral had not followed correct procedures. The Cape High Court agreed, and threw Sanral’s case out of court with a damning judgment citing Sanral’s former CEO, Nazir Alli, who claimed to have board approval for the Winelands route, but could not produce it in court. Alli’s assertion that the board had passed the requisite resolution was “so far-fetched as to be untenable” said the court ruling, which granted the City of Cape Town’s application for the toll road declaration to be set aside. Outa has since laid charges of perjury against Alli, who has vacated the CEO position in favour of Skhumbuzo Macozoma.

We have since learned that Sanral has abandoned plans for the De Beers By-Pass route, which would shave just 14kms off the journey from Johannesburg to Durban at a cost of R10bn, but would by-pass and therefore kill of the town of Harrismith. Noseweek has reported extensively on this illogical boondoggle and would like to think it had a part to play in this victory for common sense. 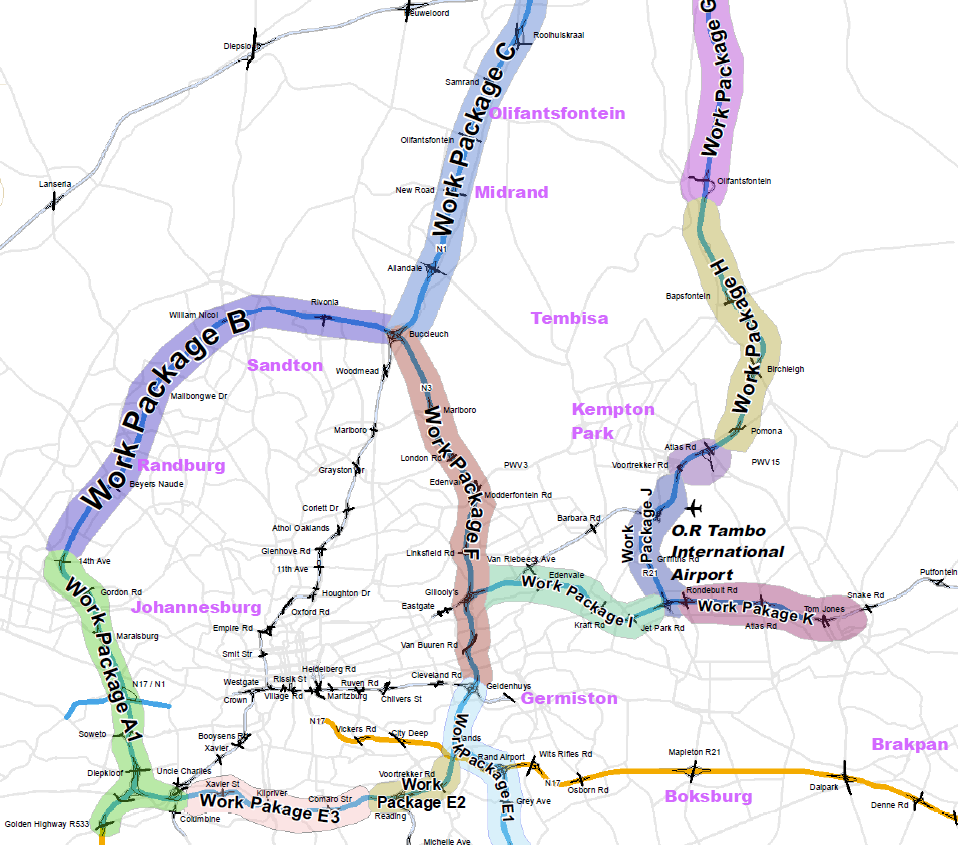